Functional Near-Infrared Spectroscopy (fNIR or fNIRS), is the use of NIRS (near-infrared spectroscopy) for the purpose of functional neuroimaging. Using fNIR, brain activity is measured through hemodynamic responses associated with neuron behavior.

fNIR is a non-invasive imaging method involving the quantification of chromophore concentration resolved from the measurement of near infrared (NIR) light attenuation, temporal or phasic changes. NIR spectrum light takes advantage of the optical window in which skin, tissue, and bone are mostly transparent to NIR light in the spectrum of 700-900 nm, while hemoglobin (Hb) and deoxygenated-hemoglobin (deoxy-Hb) are stronger absorbers of light. Differences in the a 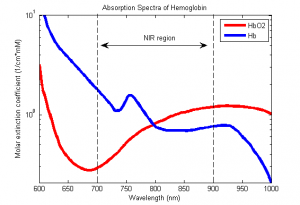 bsorption spectra of deoxy-Hb and oxy-Hb allow the measurement of relative changes in hemoglobin concentration through the use of light attenuation at multiple wavelengths. Two or more wavelengths are selected, with one wavelength above and one below the isosbestic point of 810 nm at which deoxy-Hb and oxy-Hb have identical absorption coefficients. Using the modified Beer-Lambert law (mBLL), relative concentration can be calculated as a function of total photon path length. Typically the light emitter and detector are placed ipsilaterally on the subjects skull so recorded measurements are due to back-scattered (reflected) light following elliptical pathways.

The use of fNIR as a functional imaging method relies on the principle of neuro-vascular coupling also known as the Haemodynamic response or BOLD (Blood-Oxygenation-Level-Dependent) response. This principle also forms the core of fMRI techniques. Through neuro-vascular coupling, neuronal activity is linked to related changes in localized cerebral blood flow. fNIR and fMRI are sensitive to similar physiologic changes and are often comparative methods. Studies relating fMRI and fNIR show highly correlated results in cognitive tasks.[1] fNIR has several advantages in cost and portability over fMRI, but cannot be used to measure cortical activity more than 4 cm deep due to limitations in light emitter power and has more limited spatial resolution. fNIR includes the use of Diffuse Optical Tomography (DOT/NIRDOT) for functional purposes.